The project team of CLASP has won the NAOJ Director General Prize!

The international team for the CLASP project has won the NAOJ Director General Prize FY2016 in the field of research and education. This is NAOJ's internal award program for NAOJ staff members or the groups led by NAOJ staff members who have achieved significant results. The CLASP team has won for the success of CLASP experiment.

CLASP is a sounding-rocket experiment to observe the polarization of a vacuum-ultraviolet spectral line (Lyman-alpha line) from the upper solar atmosphere (i.e. the chromosphere and transition region), and then to measure the magnetic fields in such atmosphere. Because vacuum-ultraviolet rays are easily absorbed by the Earth's atmosphere, the observation should be performed above the Earth's atmosphere by launching the instrument with a rocket.
The team had developed a new observation instrument for 7 years to measure weak magnetic fields in the chromosphere with the Hanle effect. The CLASP instrument was launched in September of 2015, and successfully performed the polarization measurement of the Lyman-alpha line for the first time in the world. Subsequent data analysis is still on-going, but it is expected that the significant scientific results will be produced. The success of the CLASP experiment has paved the way to the measurement of the chromospheric magnetic fields by polarization measurement in ultraviolet wavelengths.

I am extremely glad that the efforts of all the team members who have proceeded with the design, development, and test have borne fruit and that this has been highly appreciated in NAOJ. All the members have actively cooperated to proceed with the project from the beginning, producing a very good team. As a result, every team member reliably supported the project. The experiences and achievements accumulated in the CLASP project are our great wealth. I hope that we can utilize this wealth in various projects in the future.

More details of CLASP are shown at the page below: 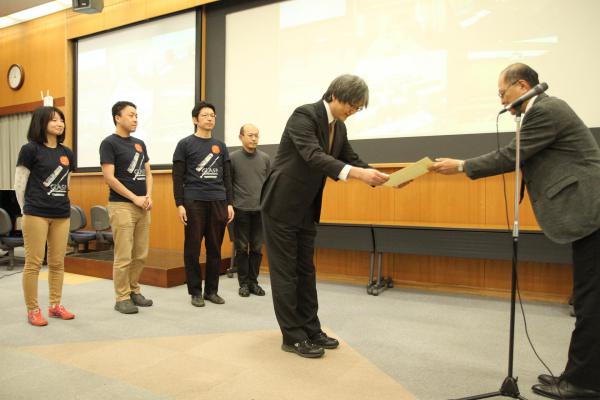 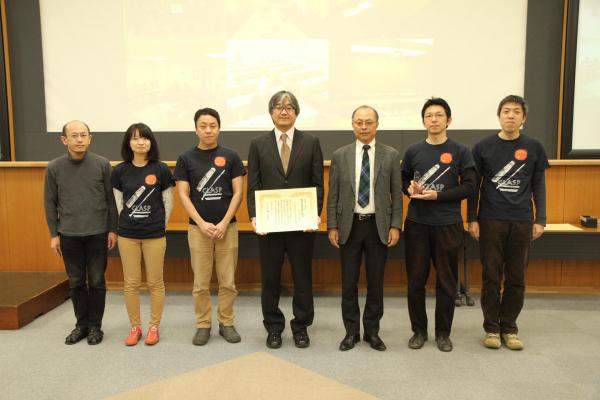 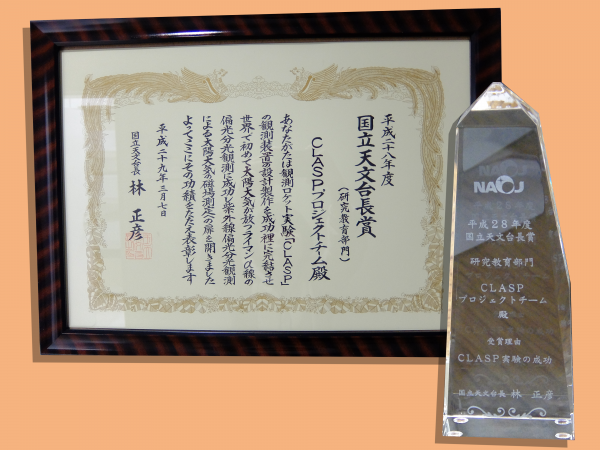 An honorable certificate and an commemorative shield (© NAOJ)