Munehito Shoda (JSPS Research Fellow) at the Solar Science Observatory of the National Astronomical Observatory of Japan (NAOJ) was awarded the 2019 PhD Prize in the Solar and Heliospheric Division by the International Astronomical Union (IAU). This prize is awarded to one PhD student in each division by the International Astronomical Union to select the most remarkable work on astronomical research carried out in the previous year. Shoda received his PhD from the University of Tokyo's Graduate School of Science in 2019 for his doctoral dissertation entitled "Fast solar wind driven by parametric decay instability and Alfvén wave turbulence." 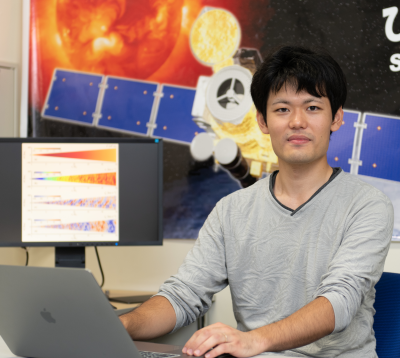 Shoda expresses his happiness and future aspirations, "I am pleased that my hard work while in the doctoral program has been recognized. I would like to express my deepest gratitude to the professors at the University of Tokyo for theirmy guidance; and I also thank the staff of NAOJ's Center for Computational Astrophysics for their generous provision of computational resources. Solar wind research is just now gaining in importance, so I would like to carry out more challenging research exceeding my current research."

The awards ceremony will be held in 2021 at the International Astronomical Union General Assembly in Busan, Korea, where the award certificate will be presented.

Figure and Movie: Three-dimensional magnetohydrodynamic simulation of solar wind near a solar pole. Given that the Sun is on the left, this figure shows the velocity of the plasma gas emitted from the Sun. The red color indicates faster speeds.The acceleration of the solar wind due to the pressure of the hot gas and the force of the magnetic field was simulated for the first time. (Credit: Shoda et al., 2019, ApJL modified.)

[Links of web sites for this topic]