Ubiquitous supersonic (150 km/s - 350 km/s) events in the solar chromosphere have been discovered fortuitously by CLASP (Chromospheric Lyman Alpha SpectroPolarimeter) which was carried up above the atmosphere by a sounding rocket on September 3, 2015 and conducted observations for 5 minutes during a ballistic flight. Having an imaging instrument on CLASP with the combination of high cadence and high sensitivity operating under seeing-free conditions led to the detection of many recurrent supersonic events at short timescales everywhere on the Sun. This study was done by an international research team led by astronomers at the National Astronomical Observatory of Japan (NAOJ). These results will appear in "The Astrophysical Journal", 832, 141, December 1, 2016.

[Details of Research]
The main aim of the CLASP experiment is to explore, for the first time, the magnetic fields in the chromosphere and transition region, which is the interface region between the solar surface and the corona, by measuring the polarization of the Lyman-alpha line (121.567nm). To avoid interference from Earth's atmosphere, CLASP was carried up to space by a sounding rocket launched from the NASA White Sands Test Facility in the United States. Not a true satellite, CLASP observed the south-west limb of the Sun, as shown by the sky-blue box in Figure 1, for about 5 minutes before falling back into the atmosphere. The main instrument of CLASP was a spectropolarimeter but these supersonic events were discovered by an auxiliary instrument, a slit-jaw (SJ) imager developed by NAOJ in collaboration with ISAS/JAXA and NASA.

Figure 1: (left) Ly-alpha image taken by the CLASP/SJ. The black vertical line at the center of the image is the spectropolarimeter's slit. The green box shows the field of view of Animation 1. (right) 30.4 nm band image taken by the Solar Dynamic Observatory (NASA). The solid box indicates the field of view of the left panel. The X and Y axes show the coordinates of the left panel. (Credit: (left) NAOJ, JAXA, NASA/MSFC; (right) NASA/SDO)

The CLASP/SJ was used to aim the spectropolarimeter during the flight because the spectropolarimeter of CLASP could obtain spatial information only along the slit (see Figure 1). To provide real-time feedback to correctly aim the instrument, the CLASP/SJ captured rapid-fire images of the chromosphere. Although the spatial resolution of this instrument was not so high, the CLASP/SJ obtained a unique data set of chromospheric images with 0.6 s cadence and high throughput under atmosphere-free conditions. Afterwards, researchers analyzed these high cadence images to see if they might contain previously unknown supersonic events at short timescales, and they found intensity distribution variations propagating at very high speeds (150-350 km/s) everywhere on the Sun.

At first glance, the time series of the original CLASP/SJ images (left panel of Animation 1) doesn't show significant activity in the chromosphere. However, by removing slow-varying components to enhance intensity changes at timescales shorter than 30 s (right panel of Animation 1), many fast-varying intensity disturbances can be seen everywhere on the Sun.

Animation 1: (left) The evolution of the left panel in Figure 1. (right) The animation after removal of the 30 s running temporal average. (Credit: NAOJ, JAXA, NASA/MSFC)

Animation 2: Same as Animation 1 but for the small area shown by the green box in Figure 1. The sky-blue solid arrows indicate the fast propagating intensity disturbances. (Credit: NAOJ, JAXA, NASA/MSFC) 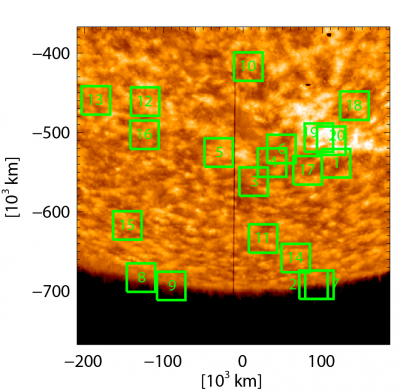 Figure 3: Fast propagating intensity disturbances are clearly observed around the centers of the green boxes. The background image is the same as the left panel of Figure 1. (Credit: NAOJ, JAXA, NASA/MSFC)

Supersonic events in the chromosphere are more frequently observed in recent days with the Japanese solar satellite Hinode or advanced ground-based solar telescopes. The propagation speeds of the CLASP/SJ events are much faster and their timescales are much shorter than other supersonic phenomena observed in the quiet chromosphere so far. The nature of the fast propagating intensity disturbances discovered by CLASP is still unknown, but the observational results suggest one possibility is that they are a kind of magnetohydrodynamic (MHD) wave.

Now that scientists know that these very fast propagating intensity disturbances exist, the research team is considering new ways to investigate them with the future CLASP 2 experiment. The CLASP/SJ is much smaller than instruments onboard satellites like Hinode. The fact that these new findings were obtained by such a small instrument shows the power of sounding rocket or balloon-born experiments for advanced scientific observations.