For the first time in the world, scientists have explored the magnetic field in the upper solar atmosphere by observing the polarization of ultraviolet light from the Sun. They accomplished this by analyzing data taken by the CLASP sounding rocket experiment during its 5-minute flight in space on September 3, 2015. The data show that the structures of the solar chromosphere and transition region are more complicated than expected. Now that ultraviolet spectropolarimetry, the method used in the CLASP project, has been proven to work, it can be used in future investigations of the magnetic fields in the upper chromosphere and the transition region to better understand activity in the solar atmosphere.

The international team used data from the CLASP spectropolarimeter, an instrument which provides detailed wavelength (color) and polarization (orientation of the light waves) information for light passing through a thin slit. The left side of Figure 1 shows the position of the spectropolarimeter slit on a background image taken by the slit-jaw camera onboard CLASP; the diagrams on the right side show the wavelength and polarization data. 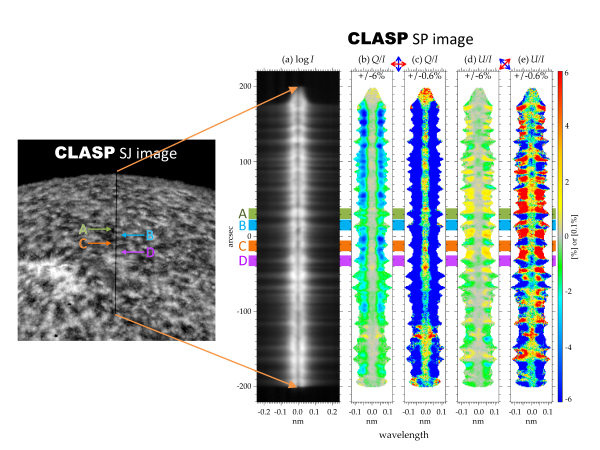 Figure 1: The position of the CLASP spectropolarimeter slit (left) and the polarization spectrum of the upper solar chromosphere and the transition region (right). (©NAOJ, JAXA, NASA/MSFC)

The researchers discovered that the hydrogen Lyman-α line from the Sun is actually polarized (see the right side of Figure 1). Some of the polarization characteristics match those predicted by the theoretical scattering models. However, others are unexpected, indicating that the structures of the upper chromosphere and transition region are more complicated than expected. In particular, the team discovered that polarization varied on a spatial scale of 10 - 20 arcsec (one hundredth - one fiftieth of the solar radius). 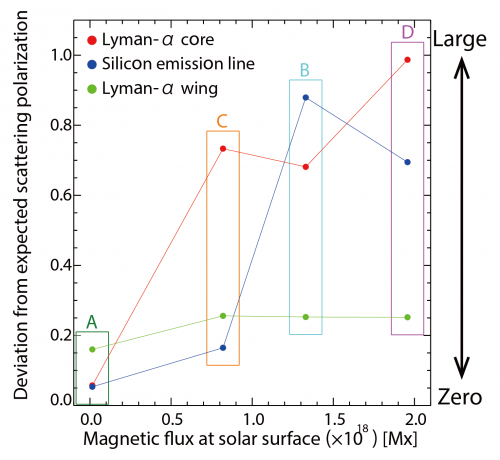 Figure 2: Comparison of the polarization of 3 spectral lines with differing sensitivities to magnetic fields. A, B, C, and D correspond to the areas labeled in Figure 1. (©NAOJ)

These epoch-making results are the first to directly show that magnetic fields exist in the transition region. They also demonstrate that ultraviolet spectropolarimetry is effective in studying solar magnetic fields. Moreover, these results have shown that sounding rocket experiments like CLASP can play an important role in pioneering new techniques, even though they are small scale and short term compared to satellites.

Dr. Ryohko Ishikawa, project scientist for the Japanese CLASP team, describes the significance of the results, "The successful observation of polarization indicative of magnetic fields in the upper chromosphere and the transition region means that ultraviolet spectropolarimetry has opened a new window to such solar magnetic fields, allowing us to see new aspects of the Sun."

These results appear as "Discovery of Scattering Polarization in the Hydrogen Lyα Line of the Solar Disk Radiation" by R. Kano, et. al. in the Astrophysical Journal Letters in April 2017 and "Indication of the Hanle Effect by Comparing the Scattering Polarization Observed by CLASP in the Lyman-α and Si III 120.65 nm Lines" by R. Ishikawa, et. al. in The Astrophysical Journal in May 2017.