Completion of the SCIP Instrument for SUNRISE-3

The development of SUNRISE Chromospheric Infrared spectro-Polarimeter (SCIP) has been completed for the International Balloon Experiment SUNRISE-3.

The SUNRISE-3 is an international project to observe the Sun using a large balloon carrying a telescope and observation instruments in the stratosphere. At a flying altitude of 35 km or higher, image distortion and light absorption by the Earth's atmosphere become negligible to allow the high-resolution and high-precision observations of the Sun. The telescope has an aperture of 1 m (twice that of the solar optical telescope onboard the Hinode satellite), making it the world's largest solar telescope to be flown in the sky.

As one of the observation instruments onboard the SUNRISE-3, our group led by NAOJ have developed a near-infrared spectro-polarimeter, the SCIP. The SUNRISE-3/SCIP will provide high quality spectro-polarimetric data to study the three-dimensional magnetic structures and their time evolution, which will help us to understand the transport and dissipation processes of magnetic energy in the solar atmosphere.

The design, fabrication, and testing of the SCIP were performed in cooperation with the Advanced Technology Center of NAOJ. We have designed an opto-mechanical system that can operate under the severe environmental conditions during the balloon flight to achieve high spatial and wavelength resolution, and have conducted optical alignment tests. Among the components and mechanisms of the SCIP, the scan mirror mechanism and the rotating waveplate mechanism were developed in Japan, while cameras and control electronics were jointly developed with a group led by the Institute of Astrophysics of Andalusia in Spain. In addition, a thermal vacuum test using a large vacuum chamber was conducted to demonstrate that the system has the functions and performance required under the environment assumed for the balloon flight. We completed these scheduled tests required for the development of the SCIP. The SCIP will be transported to the Max Planck Institute for Solar System Research in Göttingen, Germany, where it will be integrated with the telescope and balloon gondola for the performance tests.

The SUNRISE-3 is scheduled to be launched from Kiruna, Sweden in June 2022, and will take about a week to fly across the Atlantic Ocean to Canada. We would like to ask for your support. 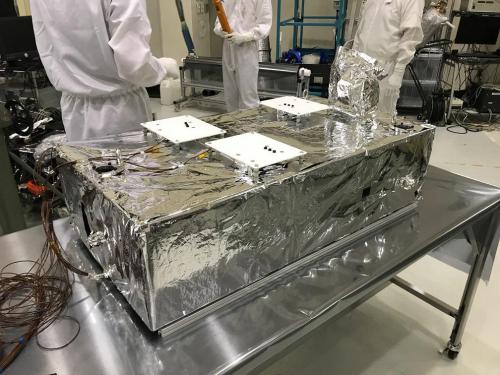 Figure 1. Exterior view of the SCIP, which was taken at the time when it was moved from the vacuum chamber after the thermal vacuum test (in the clean room at the Advanced Technology Center). The silver film covering the SCIP is a thermal insulation sheet. 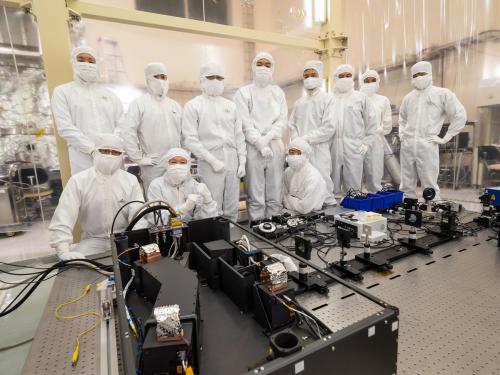 Figure 2. Group photo of the SCIP development members (in the clean room at the Advanced Technology Center). The black box in the foreground is the SCIP with its cover opened.