Scientists have begun analyzing data about the solar corona captured by the FOXSI-3 sounding rocket experiment. This is the world's first solar corona X-ray data that meet all four requirements of high contrast, and high resolution in position, time, and energy. Further analysis of this data will deepen our knowledge of the Sun.

The solar corona is filled with hot plasmas at a temperature of more than 1 million degrees Celsius. The corona is a dynamic environment where various energy releases occur. The most typical dynamic phenomena in the solar corona are solar flares (the largest explosions in our Solar System). When a solar flare occurs, the temperature of the flaring region reaches more than several tens of millions of degrees Celsius and plasma particles are accelerated to close to the speed of light. Additionally, the coronal plasmas ejected by the solar flare (called "Coronal Mass Ejections (CMEs)") sometimes reach the Earth and affect our environment and societies. Thus, the study of the Sun is important from the point of view of not only the fundamental study of solar and plasma physics but also the investigation of the impact on the Earth's environment.

At temperatures from 1 million degrees Celsius to several tens of millions of degrees Celsius, coronal plasmas emit X-rays. But X-ray observation is not easy, because the X-rays are absorbed by the Earth's atmosphere, so observations from space are required. For the study of the solar corona, observations of the X-rays from the Sun have been performed since the 1980's with instruments aboard high altitude balloons, sounding rockets, and satellites. Additionally, usual mirrors and lenses cannot be used for X-ray observations. In these strict conditions for the X-ray observations, various types of instruments have been invented and the solar corona has been continuously observed in X-rays using such instruments. However, there is still room for improvement.

What is the ideal observation of the solar corona? It is the precision observation of X-rays that reflect the state of the coronal plasma. Namely, it is to investigate the spatial distribution of X-ray intensity that varies with coronal structures, to track its temporal evolution, and to analyze the energy of X-rays. Thus, the ideal observation requires the following four capabilities simultaneously; high contrast (the capability to clearly distinguish the structure in dark and bright regions); and high spatial-, temporal-, and energy- resolutions. However, the existing observation methods did not satisfy these capabilities simultaneously. Noriyuki Narukage, NAOJ Assistant Professor, and Shin-nosuke Ishikawa, a researcher at Nagoya University, together with the scientists at Kavli IPMU / The University of Tokyo and Institute of Space and Astronautical Science / Japan Aerospace Exploration Agency (ISAS/JAXA), developed the high-speed soft X-ray camera, installed it on the sounding rocket FOXSI-3, and then realized the observation of the solar corona satisfying the four capabilities simultaneously. The launch campaign of FOXSI-3 is summarized in the following movie. (* The FOXSI-3 is a US-Japan collaboration project and was launched at White Sands in the US on September 7, 2018. The details of the instruments are described in https://hinode.nao.ac.jp/en/news/topics/foxsi-3-180907/ .)

Figure 1. Focusing imaging spectroscopic data in soft X-rays obtained by the FOXSI-3 sounding rocket. The FOXSI-3 high-speed CMOS camera took a continuous exposure at 250 frames per second (4 ms exposure) for approximately 6 minutes. Panel (a) shows real FOXSI data. Each white dot in these images is an individual X-ray photon. The signal of each white dot is proportional to the energy of the X-ray photon. Hence, from these images, we can simultaneously obtain information about the position, timing, and energy of each X-ray photon. Using this information, we can construct a solar corona image (see Panel (b), which shows 1.5 million integrated X-ray photons detected over 2 minutes). We can also investigate the temporal evolution and spectrum of the X-ray photons, as shown in Panels (c) and (d), respectively. These plots cover the region of the black box in Panel (b). The gray bars in the plots show the 1-sigma error of photon statistics. (* The photon numbers in Figure 1 are the photon numbers detected by the detector. Hence, in order to convert these detected photon numbers to the photon numbers originally emitted from the Sun, the efficiency of the instrument should be considered.) (© FOXSI-3 team) 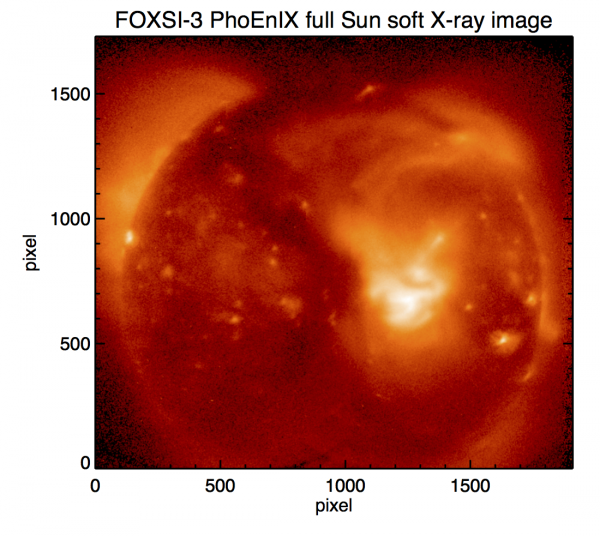 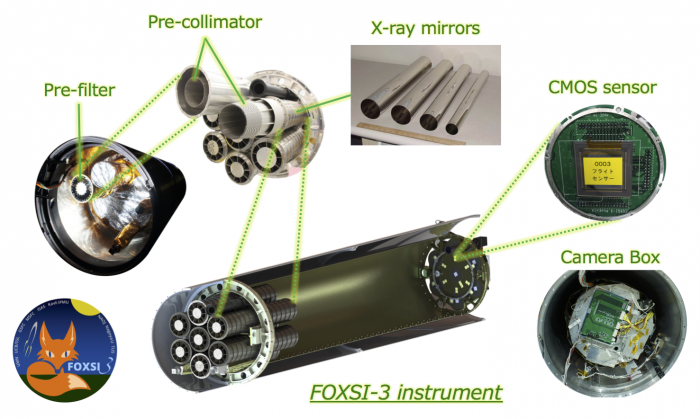 Once spatial-, temporal-, and energy- information about individual photons is obtained by the method explained above, scientists can analyze these data in various ways. For example, by arranging all detected photons in 2-dimensional space, we can obtain a solar image through pointillism (see Figure 1 (b) and Figure 2). On the other hand, we can investigate the temporal evolution of the coronal phenomena by tracking the temporal variation of the X-ray photon number. Since the camera we developed can perform continuous high-speed exposures, it can collect many photons in a short period (namely, about 50 photons in 4 msec) and can track the temporal evolution of the X-ray photon number with a temporal resolution of 10 seconds (see Figure 1 (c)). Moreover, by investigating how many photons of each energy were detected, we can make the spectrum of the corona (see Figure 1 (d)). Though Figure 1 shows the plots of temporal evolution and spectrum of the active region (indicated by the black box in Figure 1 (b)) as an example, we can do similar analysis anywhere in the solar corona since FOXSI-3 observed the entire solar corona as shown in Figure 2.

FOXSI-3 obtained a high-contrast image across the entire solar corona (sharp image for not only bright regions but also dark regions; see Figure 2) thanks to the dedicated X-ray mirror (i.e., grazing incidence mirror developed by NASA/MSFC) that can collect and focus the X-rays on the detector (see Figure 3).

The observation method demonstrated by FOXSI-3 is called "focusing imaging spectroscopic observation," since the mirror collects and "focuses" the X-rays on the camera detector and the high-speed camera simultaneously takes "image" and "spectroscopic" data. This method has enabled us to observe the solar corona in soft X-rays with the four capabilities (namely, high contrast; and high spatial-, temporal-, and energy- resolutions) for the first time in the world by using FOXSI-3. Now, the FOXSI-3 team members are analyzing these state-of-the-art data. Please look forward to seeing new scientific results derived from these data. 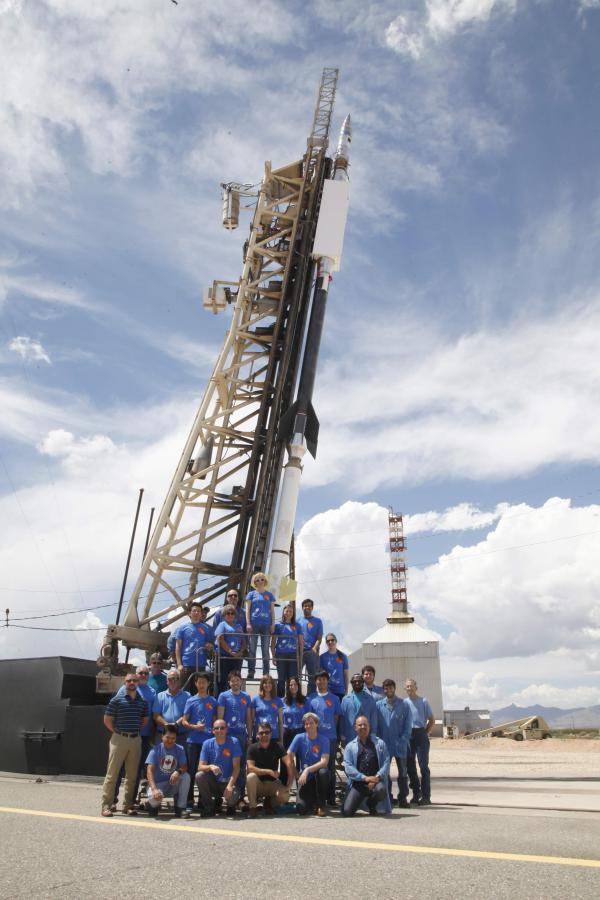 Figure 4. Group photo of FOXSI-3 team before the launch. Taken photo in front of the sounding rocket with FOXSI-3 installed. (© NASA, FOXSI-3 team)