The Japan-USA-Europe joint team of CLASP2 sounding rocket experiment received the Marshall Space Flight Center (MSFC) Group Achievement Honor Award from the National Aeronautics and Space Administration (NASA). This award recognizes groups that have achieved outstanding results through combining their individual skills. The reward recipients include 14 people from Japan who were involved in the development of the project. 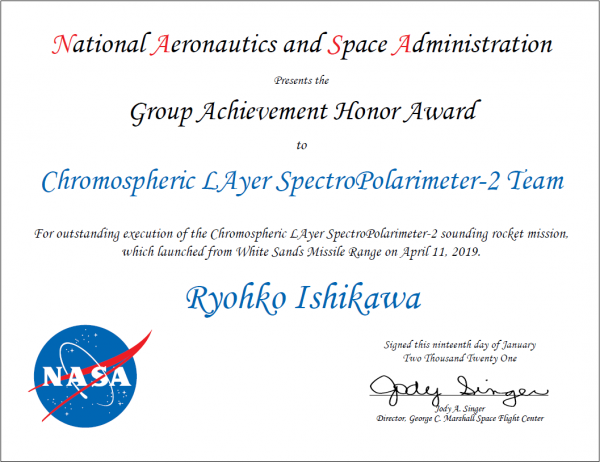 CLASP2 (Chromospheric LAyer Spectro-Polarimeter) is a solar observation experiment launched on a NASA rocket. The development of the rocket-borne instruments was led by NAOJ, in cooperation with France and USA. CLASP2 was launched from the White Sands Missile Range in New Mexico, USA, on April 11, 2019 (Mountain Daylight Time), and succeeded in performing high-precision spectro-polarimetry in the near-ultraviolet region (near the 280 nm spectral line of ionized magnesium) for the first time in the world.

"We started the development of CLASP2 in 2015, right after its predecessor, CLASP, was launched." says the Japanese principal investigator, Assistant Professor Ryohko Ishikawa (NAOJ), "I am very happy that our hard work and the teamwork between Japan, the USA, and Europe over the four years between the launch of CLASP and the launch of CLASP2 in 2019 have been recognized in this way. CLASP and CLASP2 have been groundbreaking instruments that have successfully tackled the observation of polarized ultraviolet light, which had been considered difficult until then. In order to achieve this, we brought together the technologies of the Advanced Technology Center of NAOJ and domestic and overseas manufacturers. I would like to thank not only the team members but also all the people who were involved in CLASP2."

At the same time as the award, the first scientific results of CLASP2 were also announced (CLASP2 initial results can be found here [link]). In collaboration with the Hinode satellite, the team succeeded in mapping the magnetic field from the visible solar surface to just below the corona. The team is now working on further analysis, and a variety of scientific results are expected in the future.

Because a state of emergency for COVID-19 was in effect in Tokyo, the award-winning team members gathered online to take a commemorative group photo with the award certificates in their hands.

A commemorative group photo of the CLASP2 Japan-side team with Zoom. 10 of the 14 people are shown.

The 14 people of CLASP2 Japan-side team who win the award are as follows;