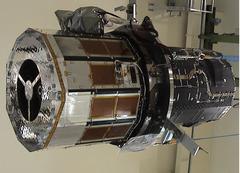 After its launch in 2006, Solar Optical Telescope (SOT) on board Solar-B will be the largest aperture, most advanced solar telescope flown in space. The SOT consists of the main 50cm aperture telescope (Optical Telescope Assembly, OTA) and focal plane package (FPP). The combined SOT system is optimized for accurate measurement of the vector magnetic field in the photosphere and dynamics of both the photosphere and chromosphere associated with the magnetic fields.

A wide range of scientific advances are anticipated from the SOT instrument, as a result of the major advances it represents in observational capability. The 50cm diameter SOT will obtain a continuous, seeing-free series of diffraction-limited images (0.2-0.3") in 388-668 nm range. The images will be acquired under very stable conditions (stability requirement < 0.09" in 3 sigma) archived by a combination of structural design and active image stabilization. The image stabilization system consists of a piezo-driven tip-tilt mirror (CTM) in OTA in a closed-loop servo using a displacement error estimated from correlation tracking of solar granulation (correlation tracker, CT). This system will minimize jitter in solar images on the focal plane CCDs. The sun-synchronous orbit of the Solar-B and the contact with Svalbard ground station in Norway (ESA) allow downlink of data nearly every orbit, hence observations will be possible 24 hours a day for about 8 months of the year.