Figure shows the optical layout of the SOT. The OTA is an aplanatic Gregorian-type telescope with 50 cm aperture primary mirror. The distance between the primary and secondary mirrors is 1.5 meters. A heat dump mirror at the primary focus removes the unused solar light (heat) outside of the 328 × 164 arcsecond field-of-view (FOV). The collimator lens (CLU) feeds a collimated light to the FPP. The polarization modulator (PM: a rotating waveplate) is located near exit pupil. All optical elements prior to the PM are rotationally symmetric about the optical axis (except for the secondary mirror supports) in order to minimize instrumental polarization. The folding tip-tilt mirror thus follows the PM. Some specifications for the OTA are given in Table 1. 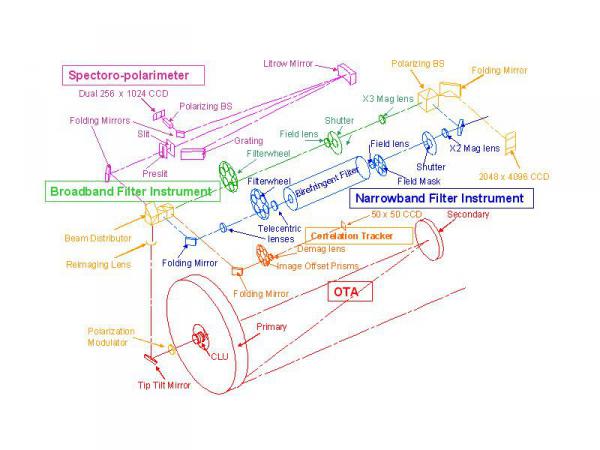 The FPP instrument performs both filter and spectral observations at high polarimetric precision, and both types of observation may be performed simultaneously but independently. In filter observations, as described in section Filtergram (FG) Observations, a 4K x 2K CCD camera is shared by the broadband filter imager (BFI) and the narrowband filter imager (NFI). Spectral observation provides detailed Stokes profiles of the magnetic sensitive Fe I 630 nm lines as described in detail in section Spectro-Polarimeter (SP).

The OTA and FPP are both mounted on the satellite optical bench, which provides stable environment from viewpoint of optical alignment.